Books of the sixteenth century

When, at the beginning of the 16th century, the book printed with movable type gradually began to lose the appearance of an incunabulum - which imitates the manuscript - by introducing the title page and the numbering of the pages, new typographical products came into circulation, often characterized by the format in eighth.
The print runs ranged from a few hundred copies to more than three thousand and the city in which the art of printing developed the most was Venice, thanks to the cultural liveliness of the environment, and to the presence of capital and raw materials.
Many printers of the time worked there, such as the famous Aldus Manutius, and others who came from all over Europe, especially France and Germany. Each one adopted a particular sign, called "brand", to make their products identifiable.
The historical library "Giuseppe Grosso" has 200 sixteenthcentury books, of which about forty belong to the Anselmi Fund. The corpus iuris civilis of the Institutiones imperiales published in Turin by Antonio Ranoto in 1519 still has the appearance of an incunabulum, with marginal notes and crosses and "little hands" drawn, the numbering in papers and not in pages. The book has a beautiful illustrated title page and is printed in two-tone Gothic type, with red and black ink. Also in Turin in 1577 were published the Generalia decreta in visitatione edita, bearing the decrees of the bishop of Lodi Gerolamo Federici, on a visit to the Duchy of Savoy as apostolic nuncio to Pope Gregory XIII.

These decrees, which regulated civil and not just religious life, were followed by an ordinance by Emanuele Filiberto which committed all officials to collaborate. The paragraphs dedicated to heretics, malefics and spells, blasphemy, usury, pawnshop, prostitution, and so on are curious.

Of Aimone Cravetta (Savigliano 1504-1569), a distinguished jurist who also taught in Avignon and whose son Giovanni Francesco (1547-1611) was the first president of the Senate of Turin, we note the Venetian edition (1549) of the treatise De antiquitate temporis , in coeval parchment binding, with a reinforcement bearing passages in Caroline handwriting. De curatione per sanguinis missionm by Leonardo Botallo (1580) Leonardo Botallo, born in Asti in 1530, was a famous anatomist and surgeon. He almost always lived in Paris where he was personal doctor of the Royals of France, Charles IX, Henry III and Catherine de 'Medici.
It is known for the description of the duct of Botallo (in the cardiac plexus), which took its name from him. He died in conditions of painful poverty around 1587.
He was the author of many publications, including the De curatione per sanguinis missionm (Botallo was a great supporter of bloodletting), of which the Historical Library has a copy printed in Lyons in 1580 by Jean- Antoine Huguetan, with handwritten margin notes.
A contemporary of Botallo was another illustrious physician, Francisco Valles (1524-1592), archiatrist of Philip II of Spain, to whom the medical treatise In libros Hippocratis de morbis popularibus commentaria is dedicated. The edition in the possession of the Library is dated Turin 1589, in coeval parchment binding and a beautiful letterpress by Niccolò Bevilacqua. An edition of Ovid's Heroides, printed in Turin in 1543 by Giacomo Portonari, stands out for its beautiful Gothic characters, the frontispiece with woodcut figures, the presence of the "hands" in the margin and a beautiful typographic mark on the last page, depicting Saint George slaying the dragon. The text is made up of 21 letters that Ovid imagines written by famous women of the myth to their lovers. Giovanni Francesco Apostolo da Montemagno (Asti), active in the 16th century, had a reputation as a talented Latin poet and was a member of the Accademia degli Illustrati. The Historical Library preserves a Pavia edition of his Succisivae Horae, printed in 1589 by Girolamo Bartoli. The work, dedicated to the well-known Savoy historian Filiberto Pingone, contains epigrams, sylvae, epistles, odes, and due to its satirical and pointed tone caused annoyance to the author, accusations by the Holy Office and attempts by the bishops of Alexandria and Acqui to prohibit the book, which was reprinted instead, with changes and additions. Of the Hecatommithi, short stories in Italian by Giovan Battista Giraldi Cinzio in two volumes, the Library has the rare first edition (Mondovì, 1565, where the printing works founded at the behest of Duke Emanuele Filiberto under the guidance of Lorenzo Torrentino operated). Noteworthy are the illustrated initials and a portrait of the author on the back of the title page. The book is a repertoire of myths and legends, which provided traces also used by Cervantes and Shakespeare (The Moor of Venice).
Cinzio (1504-1573), noble from Ferrara, man of letters, poet and playwright who held the chair of rhetoric in Ferrara and until 1559 was secretary of Duke Ercole II d'Este, also taught in some universities in Piedmont. He is considered important above all as a theater theorist and forerunner of new genres in that area. The Pleasant Dialogues by Mr. Stefano Guazzo gentleman of Casale Monferrato (Piacenza 1587), re-propose the cultural tradition that formed the basis of the Civil conversation (his other well-known work, a classic on the ethics of civil life, which also reached the England of the Tudors and France, where it was read by Montaigne). The author (Casale Monferrato 1530 - Pavia 1593), belonging to a family that had important roles in many centers of northern Italy, traveled for a long time between Italy and France following the Gonzagas. 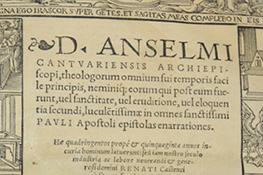 Of the blessed Angelo Carletti, patron saint of Chivasso (1411-1495), the Historical Library already possesses an incunabulum, the Summa angelica, the only book printed in Chivasso in the 15th century, a moral treatise that had great success, but as a symbol of Catholic orthodoxy it was burned by Luther in the square of Wittenberg on 10 December 1520. The same work is also preserved in a Lyonese edition of 1534 by Scipione De Gabiano, of the important family of printers who printed the first foreign edition of the Divine Comedy in 1502. This Summa of 1534 is distinguished by a beautiful illustrated frontispiece, and still retains a little the appearance of the incunabulum, numbered in cards and not in pages.

Among the sixteenth-century books of particular bibliographic value we remember D. Anselmi cantuariensis archiepiscopi... in omnes Sanctissimi Pauli Apostoli epistolas enarrationes, an edition of the commentaries of Sant'Anselmo on the letters of St. Paul, collected by the Benedictine monk Hervaeus, and printed by Gottfried Hittorp in Cologne in 1533. The edition in possession of the Library, belonging to the Anselmi Collection, is particularly valuable for the title page and initials illustrated by German woodcutters.